According to foreign media reports, NASA’s Curiosity rover successfully landed the surface of Mars taken after a large amount of image data, scientists analyzing data made ​​public after some pictures, some UFO enthusiasts trying to find these pictures on alien spaceship aliens exist or can imply information. A named Scott C. Warin curious UFO enthusiasts from images found in a “lizard”, which is evidence of life on Mars do?

If we do not look closely, is not easy to find these bulky smaller rocks

As can be seen from the figure, the shape of the rock is very unique, very much like a lizard on the planet, at first glance like a lizard on the surface of Mars, petrochemical, and of course this is not the first UFO enthusiasts found a “Martian creature”, so far, has been “discovered” 10-15 looks very similar to the Earth’s biological rock samples, Scott C. Warin said he had found a stone in four different pictures in different positions and then in the fifth photo is gone, if we are not careful observation to find, easy to miss these details.

Curiosity captured a large number of images of the Martian surface, UFO enthusiasts in the image found a variety of “Mars creature”

Some conspiracy theorists believe NASA conducted biological experiments on Mars, life on Earth through the detector to be observed on the Martian environment. Curiosity rover on August 6, 2012 successfully landed on the surface of Mars, so far still investigating the surface of Mars Mars geological changes and life information, which sets the value of $ 2.5 billion of the Mars rovers have found a hot and humid environment existed in the past, the conditions of life and has evolved, certain chemical composition and microbial production environment and the early Earth-like. 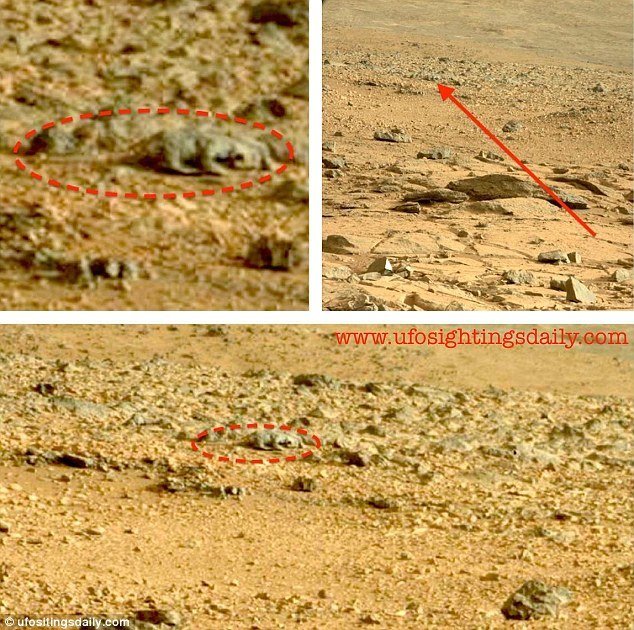 Arrow pointing to is the “Martian creature” discovery places

Mars is very dry, and now almost no traces of liquid water, apparently Martian organisms will not survive on the surface, similar to those found in the figure lizard creature is only one of Mars rocks of various shapes, that does not mean Mars does not exist microbes, scientists have found that the presence of methane in the Martian atmosphere, which may be due to biological processes, Curiosity rover did not detect the near-surface layer of methane signals, so scientists think Mars microbes may not exist on the landing Curiosity near the site, the new generation of the Martian atmosphere volatiles detector will investigate this question. Trying to find a source of methane in the Martian atmosphere.

Scientists say humans will evolve into a new population in 2050

Cosmic strings or can be manufactured using the “time machine”